Sometimes You Just Got To Let it Go!!

I worked on my pre-class homework today for Summer Card Camp 2.  And I worked on it.  And I worked on it some more.  And nothing, absolutely nothing was taking shape.  Problem: I had this idea stuck in my head of what I wanted it to look like.  I don't know how many times I tried to translate what was in my head to paper, but I know it was enough to send a few sheets of *good* paper in the garbage, and enough to have spent four - yes FOUR hours in my craft room trying to make it happen.  At last I just gave up with forcing *that* idea.   I just started to play - no pre-conceived ideas of how it was supposed to look - just playing.  And guess what - I ended up with something I liked!  Totally different from what I had planned originally, but it did come together at last!

On the off chance that I don't get to make another card before class starts on July 8, I thought I would combine the two challenges.  The first is a colour challenge.  The colours (as displaying on my screen, which doesn't necessarily mean they are the intended colours!!) are mauve, deep purple, pink, light blue and white.  The second is a sketch.  And the two together, in my card anyway, look like this: 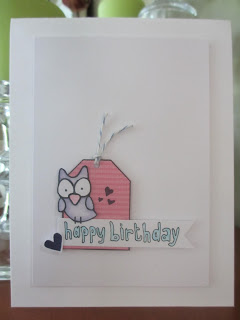 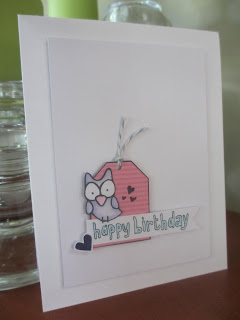 Went totally CAS after the original plan foiled dismally.  And I mostly used the TAWS Tag Alongs set.  I did get brave, and decided to doodle my own sentiment.  I kind of liked how it turned out - thought it went well with the little bird, and it gave my a place to sneak in the light blue!  I was thinking about adding some splatters, and still not sure if maybe I should have, but it will have to do!

Hopefully I'll get a chance to play again - I'm totally looking forward to the class!
Thanks for coming to check things out today!
Shannon 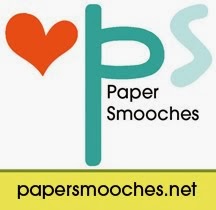